This is a Must-attend for all Hobbit and Lord of the Rings fans! Peter Curtin from the Burren Tolkien Society has summoned the experts on everything Middle Earth, and they have followed his call.

Peter Curtin of the Roadside Tavern in Lisdoonvarna spent a lot of time researching the truth behind some statements made to him during a chance encounter in the 1970’s. A lady with connection to the household at Gregan’s Castle where JRR Tolkien used to stay numerous times claimed that the famous writer of the “Lord of the Rings” trilogy took inspiration from his visits and excursions in the Burren.

This one-day festival will explore the story behind the classic series, and also feature other areas of interest like Arms & Uniforms during the Irish War of Independence, and the material culture of the Vikings. Liam Campbell, a Tolkien expert, archaeologist Shane Delaney and herbalist Lisa Guinan will give very informative and interesting talks. Award-winning model making expert Mark Maher, who worked his magic for the LOTR films, will share his secrets in a presentation.

There will also be a musical side to the eventful day which starts at 1pm. Spontaneous storytelling with music for one, and then the evening will conclude with music from the Termites Club.

David Swift of Claíomh will be demonstrating leather craft-working throughout the day.

There is no admission charge for the festival day, everybody is welcome!

1pm – Welcome and Launch of Hobbit Ale by Peter Curtin 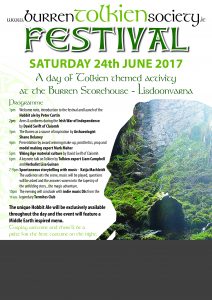 7-9pm – Spontaneous storytelling with music by Katja Machleidt
The audience sets the scene, music will be played, questions will be asked and the answers woven into the tapestry of the unfolding story… the magic adventure.

10pm – The evening will conclude with indie music DJs from the legendary Termites Club.

David Swift of Claíomh will be demonstrating traditional leather craft working throughout the day.

During the festival, the unique Hobbit Ale will be exclusively available, and the event will feature a Middle Earth inspired menu.

Everybody is encouraged to don a costume. There will be a prize for the best costume on the night.