The student from the midlands called last minute to book a stall at the Burren Slow Food Festival. On the Saturday morning, he arrived with his father, unpacked his pieces of art and decorated his stall in the Pavilion in Lisdoonvarna. He surely hoped to sell some of his pieces, but he definitely did not expect to take the limelight and talk in front of an audience. 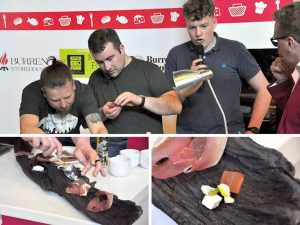 One of the chefs present at the festival, Jonathan Keane from The Lodge at Ashford Castle in Cong, fell in love with the beautiful, handcrafted pieces of ancient bog oak. He bought a piece and used it in his cookery demo a short while later, and while he decorated little appetizers on the old piece of wood, the student explained to the audience, how he found the pieces and how he treated the old bog oak.

Just one of the things that can happen at the Burren Slow Food Festivals!

While networking is one aspect of the festival, there are several others, like soaking up knowledge through talks and cookery demos; getting to know small producers and their products, and being able to ask them all kinds of questions right there and then; and tasting wonderful samples of what the sea and the Irish soil have to offer.

Some of Ireland’s finest food and drinks producers will be in attendance over the weekend, hosting tastings and demonstrations of seaweed-based or inspired produce such as Bláth na Mara Seaweed Pesto, An Dúlamán Irish Maritime Gin and Wild Irish Sea Veg from the local Talty Family in Co. Clare. 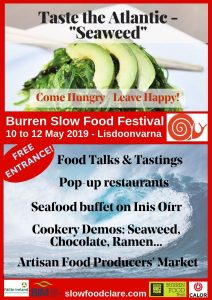 With fascinating talks exploring all aspects of seaweed, including using it in creative culinary ways, other speakers announced include Jack Crotty from Neighbourhood Foods, Oonagh O’Dwyer from Wild Kitchen Seaweed and Evan Talty who hosts a seaweed foraging walk on the morning of Saturday 11th May.

Two exclusive pop-up restaurant events will take place, inspired by the weekend’s theme, with limited tickets available for each on Eventbrite.ie.

On Friday evening the festival begins with a scenic trip to the smallest of the Aran Islands, Inis Oírr, for a seafood buffet in Tigh Ned’s pub prepared by the Ó Conghaile family, the island’s local lobster and crab fishermen. On Saturday evening Chef Niall Davidson hosts an exclusive pop-up dinner ahead of the unveiling of his new Dublin restaurant, served in the charming surroundings of The Burren Storehouse. On Sunday, Fish Shop’s Jumoke and Peter go west for their first Clare pop-up with an intimate 3-course dinner celebrating the finest catch from that day for just a very limited number of lucky ticket holders. 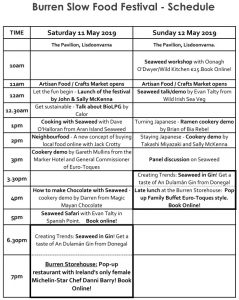 “The Burren Slow Food Festival gives us a platform to promote the best of the Burren’s produce, now recognised as some of the finest in Ireland and internationally,” says Birgitta Hedin-Curtin, founder member of Slow Food Clare and Chairperson of the Burren Slow Food Festival. “This year our theme is Irish seaweed, and we are encouraging guests to ‘Taste the Atlantic’ by showcasing some of the the best seaweed producers and welcoming some of the biggest and most innovative names in Irish cooking who are doing really interesting things with this versatile product.”

The Burren Slow Food Festival 2019 will be officially opened by John & Sally McKenna on Saturday May 11th at midday in the Pavilion Theatre in Lisdoonvarna.